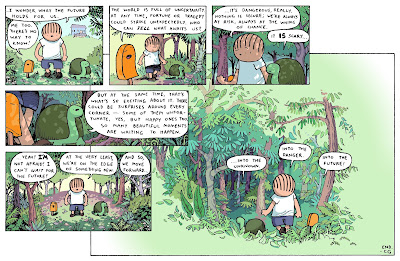 Well, here it is. The last Billy the Pop strip. It's hard for me to figure out what to say about it, other than that I hope it's a satisfying ending.
It's the first day of summer, fittingly, because it was about this time of year that I started drawing this comic in 2013, as a rising seventh-grader. It's surreal to think back to that time now, as I currently sit in the same basement, on the same computer that I posted the first Billy strip with. I almost feel like a completely different person today; my seventh-grade self had neither the drawing skill nor self-awareness to fully know what he was committing to in starting a webcomic. I still don't know much about managing an online presence or marketing myself on the internet, but that was never the point, really. My aim was to personally progress in the medium of comics, to force myself to work on a long-term project and see it through to its conclusion. And now, seven years later, I believe I successfully did that.
I've learned so much about comics and myself as Billy has continued on. On a simply visual level, I like to think I've improved at least a little since the early days of the strip (which are rather embarrassing for me to look at now). I have more confidence in my lines and a better grasp on color and panel layout now. Perhaps more importantly, I've learned quite a bit about writing in the course of making Billy. Comic writing is a delicate thing, and it's taken a long time for me to fine-tune mine to an effective level of concision and cleverness, while also balancing comedy with (what I think are) thoughtful or profound moments. I know I have a long way to go in this respect, but I've still come to appreciate the writing side of comics, and writing in general, much more. It's also interesting to see how I've changed since the strip began. In posting these online, I wanted to create pressure on myself, even if imaginary, to give my readers new comics regularly. It pushed me to keep the strip going and stick to deadlines (although clearly, the deadlines part fell off in recent years). It's hard to know for sure, but this could have helped me form the creative work ethic I have today. The comics themselves, and the commentaries that I'd write under them, have been pretty indicative of who I am as well. When I read my earlier posts on this blog, I can see myself as the unassuming kid I was (again, embarrassing), with barely any sense of humor or language to explain myself. The subjects of these strips and the characters' dialogue have often related to my own experiences and thoughts, so when I read them I can recall much about my headspace and personal life at the time. Altogether, this webcomic forms a document of my growth as an artist and as a person, and for that alone it's very valuable to me.
Overall, there are 749 Billy the Pop comic strips. I find it kind of funny that, while this comic has been present for so much of my life and has taken up so much of my time, it hasn't created that large of a body of work by comic strip standards. The format of this strip was based off that of a newspaper comic, but if I had actually released these comics daily like in a newspaper, the entirety of Billy would have lasted just over two years — not much compared to most long-running strips. Of course, if I hadn't drawn this strip over such a long period, it probably wouldn't have matured by the end the way it has.
When I started drawing Billy, I hoped to become a syndicated cartoonist someday. That's no longer my goal; honestly, I'm not sure what my goal is now. There are so many other art forms that I've become captivated by in the last seven years and that I plan to keep working in — film, animation, writing, painting, and maybe even music. But never fear, I'm not done with comics! At the moment I'm not very interested in individual newspaper-style strips, but I'd love to work on a large-scale graphic novel eventually. I by no means consider myself a master of comics now, but drawing Billy the Pop has brought me to a place I'm comfortable with, a place I can jump off from whenever I decide to work in the medium again.
Thank you all so, so much for sticking with the strip all this time. It's been very comforting having this little corner of the internet for people to visit and read my silly cartoons. I've appreciated all the pageviews, feedback, and book sales that the strip has resulted in. Really, I'm just grateful that anyone has paid any attention! You've been endlessly kind and supporting over the years; it's meant the world to me. Thank you!
This, of course, is not the final release for Billy and the gang. By the end of the summer, if all goes well, I'll have put together the third and final Billy book collection! I'll also be working on a new website, where I'll be collecting and displaying all the other artwork I make. Once both of those things are done, I will make one last post on this blog to notify you guys. Until then, there are a few places you can see what I'm up to:
My Instagram (@colegoco) (where I post random art I'm working on),
my YouTube page (where you can see my film and animation projects),
and the Billy the Pop Facebook (basically defunct, but for posterity's sake).
Plus, you can always email me at billythepop@gmail.com.
For now, goodbye, everybody! Thanks for everything.
— CG
Posted by Billy the Pop at 11:04 AM No comments:

And so, the story finally ends. Don't worry, there will be one more final strip after this, so I'll save the sentimental rambling until then.

Still, this storyline was quite an interesting project for me. It consisted of 42 strips total and took almost a year and a half to do (which is more indicative of my laziness than the complexity of the story), making it by far the longest-running series in this strip. If you'd like to start back at the beginning, here's a link to the first strip of the story. Reading it all together is strange to me, because it feels like forever since I drew the gang leaving their house. It's also strange that, as large-scale as this story was for me, it really only amounts to about an 11-minute cartoon's worth of content. That said, I'm certainly proud of how it all turned out! It feels great to have completed a story with so many shifts and parallel plotlines, especially in a medium like this where the whole thing has to be split into equally-entertaining tiny chunks. I learned a lot about the limits of comic strips while drawing this — how much plot information can be contained in one strip, how to balance that information between visuals and dialogue, and how to intersperse jokes in a way that drives the story forward. I don't know if it worked 100% of the time, but overall I'm quite happy with it, and I hope it was enjoyable for you all to read too!

Next Comic, Last Comic and Home links are up here!